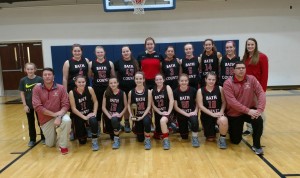 The Bath County LadyCats fell a bit short, falling to Sayre High School in the championship game of the Whitefield Academy Christmas Classic on Friday by a score of 63-42. The LadyCats had three players in double figures, with McKenna Moore leading the way with 14.

The second quarter continued to be a battle in the paint. Kelsey Roberson played well inside in the second quarter. Roberson added five points and two rebounds. Morgan McNabb came off the bench and gave the team a spark; she was able to make two assists, one was a nice no-look pass to Roberson as she completed the basket and added a free throw after being fouled. Sayre built a 20-14 lead before Bath County rallied to tie it at 20-20. Sayre had a late burst just before the end of the period and took a 28-22 lead into halftime.

Sayre pulled away in the third dominating the boards with their size. Offensive rebounds by Sayre gave them second chance opportunities that widened their lead. Sayre’s Kaya Davis proved to be too much inside for the LadyCats posting a game-high 31 points. Moore and Faudere were able to stop the blow by hitting a pair of back-to-back threes. Moore finished with six in the third quarter. Lady Cats were down 47-34 after three quarters of play.

Sayre was able to put away the game in the fourth quarter, Roberson led the Lady Cats in the final quarter; she scored five of the eight points. Moore ended the game with 14 points, Faudere with 10, and Roberson with 12.

Their next game is a home district clash against Fleming County on Monday, January 2. Game is set to tip at 6 pm and will be followed by the boys game at a 7:30 pm. 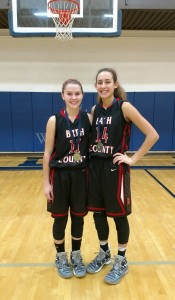